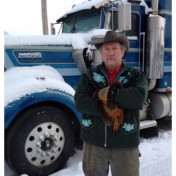 Job title: Ice road trucker and gold prospector Age: 62 Working Locations: North West Territories, Canada and Alaska. Hazards of the job: Blizzards, whiteouts, -40ºC, falling through ice. Favourite app: None: “I just want to make a phone call.” Tell us about your job I don’t have a job. I’m just entertaining myself until the coffin’s built! I drive trucks. I work on the ice… Read more »

I took a tourist to lunch at the Red Apple last Tuesday. It was drawn out. Then we visited with one of the Laserich boys at the next table. He had flown in from Iqaluit. After lunch we toured Jean Cadieux’s gift shop. I didn’t pay attention to the time. We had a very nice visit. As we left the… Read more »

The trees have been removed and the rock is being blasted. The new hospital is on its way to being built. The old hospital, which is fairly new when compared to other hospitals in North America, was built by the government. The government couldn’t afford to build the new hospital so has involved the private sector as partners to build… Read more »